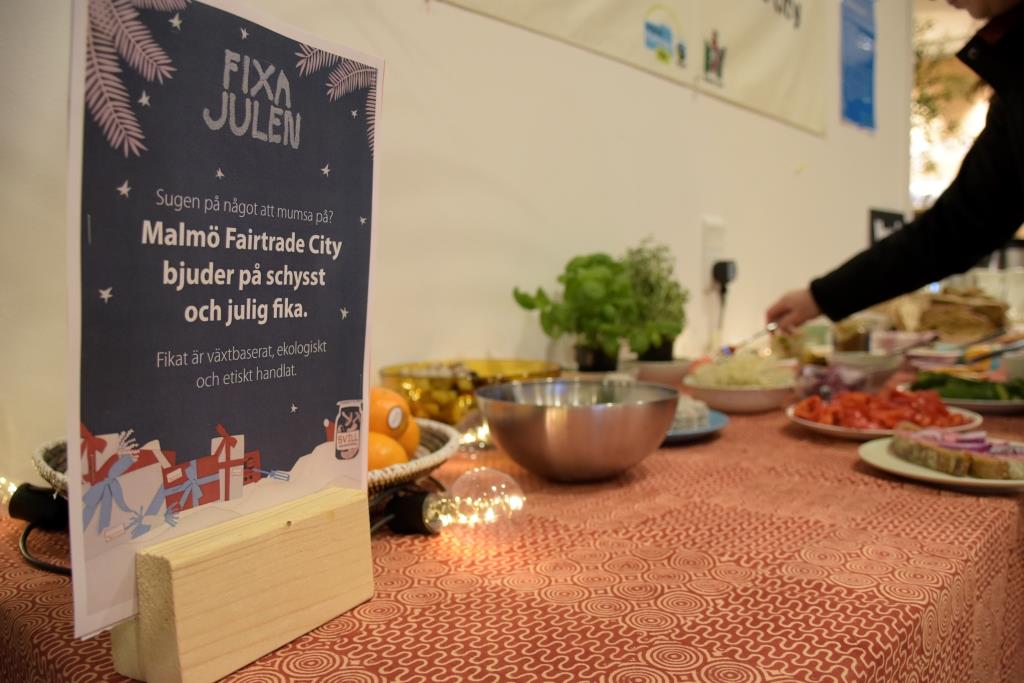 In 2006, Malmö was the first city in Sweden to become a fair trade city, a certification system to indicate a city is engaged in the issue of ethical consumption.

Malmö Fairtrade City is a cooperative effort between the city, businesses and the local community and the purpose is to raise awareness and understanding of fair trade. Every year certain criteria must be fulfilled to be “re-certified” as a fair trade city.

The Fairtrade City Office at the Environmental Department has developed strategies and events around Christmas products, repair workshops, chocolate tastings and panel discussions about fair and ethical trade.

Malmö Fairtrade City has arranged a wide variety of events with the goal to raise awareness, such as fair trade festivals, fashion shows and live cooking shows. One of the most popular events is the fair trade and sustainable Christmas design market in the city center, which began in 2008 and has continued to attract visitors and media coverage.

Winner of the 2021 Fair and Ethical Trade City Award

At the end of 2020, based on 11 eligible applications from local authorities across the European Union, a jury composed of representatives of business, civil society, the International Trade Centre and the European Commission, designated Malmö as the EU City for Fair and Ethical Trade 2021.

“This award recognizes that in today’s interconnected world, making more sustainable choices at the local level in the European Union will have positive ripple effects on people’s livelihoods and the environment,” Executive Director of the Geneva-based International Trade Centre (ITC) Pamela Coke-Hamilton said. “My hope is that we can scale up these kinds of interventions all across the globe and other cities can learn from the excellent example set by Malmö.”

The jury noted that Malmö stood out as an interconnected city with a global impact and an inspiring vision. This approach was combined with exciting projects in the city and developing countries on novel topics such as e-waste.

The city has demonstrated its commitment to tackling new challenges such as circular production, human rights diligence, and ultimately making it “easy for everyone in the city to do the right thing” − which is the city’s motto.

The award will fund a project selected by Malmö to support fair and ethical supply chains in a non-EU country improving working conditions and the protection of the environment.

We use cookies on our website to give you the most relevant experience by remembering your preferences and repeat visits. By clicking “Accept”, you consent to the use of ALL the cookies.
Cookie settingsACCEPT
Manage consent

This website uses cookies to improve your experience while you navigate through the website. Out of these, the cookies that are categorized as necessary are stored on your browser as they are essential for the working of basic functionalities of the website. We also use third-party cookies that help us analyze and understand how you use this website. These cookies will be stored in your browser only with your consent. You also have the option to opt-out of these cookies. But opting out of some of these cookies may affect your browsing experience.
Necessary Always Enabled
Necessary cookies are absolutely essential for the website to function properly. This category only includes cookies that ensures basic functionalities and security features of the website. These cookies do not store any personal information.
Non-necessary
Any cookies that may not be particularly necessary for the website to function and is used specifically to collect user personal data via analytics, ads, other embedded contents are termed as non-necessary cookies. It is mandatory to procure user consent prior to running these cookies on your website.
SAVE & ACCEPT
Receive our sponsorship and exhibition prospectus

Please complete the form below to receive more information on how you can become a Sponsor or Exhibitor of the ICLEI World Congress 2021 – 2022: